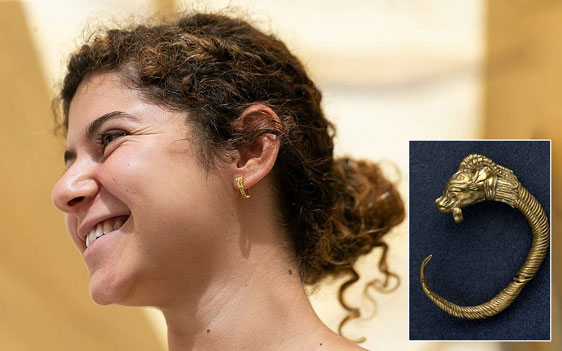 The discovery of a single, approximately 2,200-year-old gold earring, at archaeological excavations near Jerusalem’s Old City gives new, much sought-after evidence of life in the conquered city during the Hellenistic period.

Found at the City of David’s ongoing Givati Parking Lot dig, the minuscule gold filigree piece depicts the head of a horned animal and is a rare artifact dating to the 2nd or 3rd century BCE, an opaque period of Jerusalem’s history.

“The moment you pick it up from the earth, it is clean and you see that it is really high-quality craftsmanship. You see how unique this object is,” said Prof. Yuval Gadot of Tel Aviv University, co-director of the excavation. “It’s coming from the Greek world, the Macedonian and Greek world, of the 3rd-2nd century BCE, and this is the first earring like that that was found actually in Jerusalem within Hellenistic-time architecture.”

Gadot and Dr. Yiftah Shalev of the Israel Antiquities Authority, co-directors of the excavation, said in an IAA press release Wednesday that the jewelry item was found in an early Hellenistic-period building deep inside the Givati dig. The site houses a patchwork of historical eras stretching from Jewish antiquity to Ottoman rule.

The Hellenistic period is “a fascinating era about which we know very little when it comes to Jerusalem,” said Gadot and Shalev. “During the course of over a century of archaeological digs in the city, many small discoveries have been made from this period — mainly consisting of pottery fragments and a few coins — but hardly any remains of buildings that could be accurately dated to this period.”

During this time, the Temple was still the center of Jewish life. The earring, found only a few meters from it, provides evidence for a Hellenistic settlement in Jerusalem, in the City of David ridge surrounding the Old City.

“For us, the moment that you see something like that, you begin to ask yourself, ‘Who was the person who was wearing the earring?’… One thing that’s for sure, is that this man or woman was wealthy,” said Gadot, adding that they would have come from an affluent home influenced by the Greek Hellenistic culture.

Rise and spread of Hellenism
The Hellenistic period began in 323 BCE upon the death of Alexander the Great at age 32 from a mysterious illness (or poisoning) in Babylon, which he had proposed to make the capital of his widespread Macedonian Greek empire. Upon Alexander’s death, his far-flung lands were fought over by neighboring kingdoms, and the region known as Coele-Syria, which included today’s Lebanon, Syria, Jordan and Israel, changed hands several times.

The beautifully wrought gold earring discovered in the Givati dig is an example of the widespread Hellenistic reach in the region. The hoop earring bears the head of what could be an antelope or a deer. Its intricate detail depicts the animal’s large eyes, mouth and other facial features. According to the press release, a gold bead with complex spiral rope-like embroidered ornamentation was also discovered at the site.

Haifa University archaeologists Ariel Polokoff and Dr. Adi Erlich examined the earring and bead. Based on similar jewelry found in Greece and across the Mediterranean basin, as well as the goldsmith’s use of early Hellenistic filigree technique — in which threads and tiny metal beads form delicate, complex patterns — Polokoff and Erlich estimated the new gold finds date to the 3rd or early 2nd centuries BCE.

During the period ascribed to the jewelry and pottery found in the excavation, Judea was a Hellenistic vassal state and under semi-autonomous Jewish rule administered by the priestly class: It was first under the rule of Ptolemaic Egypt from 301 to 198 BCE, and then under the Seleucid Empire after Antiochus III conquered Jerusalem. Eventually, as the Hellenistic influence became even more pronounced under the Seleucids, many Jews were secularized. Those who remained religious had less freedom of worship, which arguably led to the Maccabean Revolt in 167 BCE.

While this era is documented in several ancient sources, including in the Letter of Aristeas, which describes the translation of the Hebrew Bible into Koine Greek (the Septuagint), in the Books of the Maccabees, and in Jewish historian Flavius Josephus’s “Antiquities of the Jews,” there is scant physical evidence of it found in Jerusalem aside from some pottery and a few coins.

“Up until now, only a few such earrings have been found in Israel, many of them in the coastal region, with one slightly different earring discovered inside a tomb in the Hinnom. However, this is the first time that such an earring has been found in Jerusalem inside of archaeological ruins from that time,” said Gadot.

The researchers cannot determine whether the earring belonged to a man or woman, nor the adorned individual’s religious and ethnic identity.

“But we can say for certain that whoever wore this earring definitely belonged to Jerusalem’s upper class. This can be determined by the proximity to the Temple Mount and the Temple, which was functional at the time, as well as the quality of the gold piece of jewelry,” said the researchers in the IAA press release.

Gadot said that ongoing analysis is being performed on the architecture of the house, the pottery, as well as the occupants’ dietary habits, which will together paint a clearer picture of who these Hellenistic-era settlers were.

Rewrite of the ancient city’s borders?
The location of the new find is outside previous Hellenistic-era evidence discovered in the City of David. According to a 2011 article, “The Mound on the Mount: A Possible Solution to the ‘Problem with Jerusalem,'” by Tel Aviv University’s Prof. Israel Finkelstein, Dr. Ido Koch and Prof. Oded Lipschits, in most periods until the 2nd century BCE, the City of David ridge itself was outside the settled city.

“In the Persian and early Hellenistic periods the settlement shrank to the original mound on the Temple Mount. The City of David was again an open, desolate area,” according to the 2011 article. The city, as it was, was small and sparsely populated.

“Remains representing the Late Bronze, Iron I, Iron IIA, and the Persian and early Hellenistic periods were found mainly in the central part of this ridge… In the second half of the second century BCE — the settlement rapidly (and simultaneously) expanded from the mound on the Temple Mount to both the southeastern ridge (the City of David) and the southwestern hill (today’s Jewish and Armenian quarters),” according to the 2011 article.

It is possible that this new discovery will cause a revision to this theory.

“The discovery of familiar Hellenistic pieces of jewelry can teach us about how Hellenistic influences reached Jerusalem during this time,” said Givati Parking Lot researchers Gadot and Shalev. “The findings from this excavation open a window to what Jerusalem was like during the early Hellenistic period.”

Based on the new findings, they conclude that during the early Hellenistic era, settlement in the city “did not reach farther than the top of the hill in the City of David, but then spread slightly to the west into the Tyropoeon Valley.” (The Western Wall’s Robinson’ Arch staircase rises from the bottom of this valley.)

“We also learned from this excavation that the residents of this area were not peasants who settled in empty areas on the periphery of the central area, but rather the opposite — they were well-off people,” said Gadot and Shalev.

The earring will be on display at the City of David from the beginning of September.

by Amanda Borschel-Dan, Times of Israel

The headline of the original story appeared as, “Rare 2,200-year-old earring a goldmine for scholars of Hellenistic-era Jerusalem.”