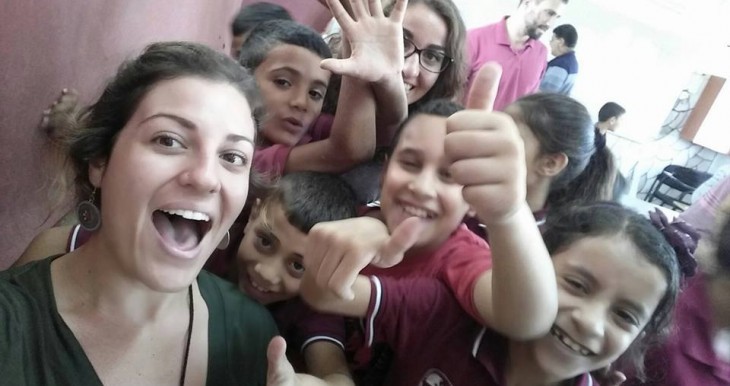 By supporting Federation you enable us to fund great projects run by our partner The Jewish Agency for Israel, helping countless Israelis make a difference in their communities.

Shelby Lifshitz took a chance and moved to Israel for a year of volunteering, hardly conceiving that the trip would end with an amazing discovery about the hidden life of her family.

Shelby Lifshitz was born in California to Israeli parents, Varda and Canaan Lifshitz. After graduating from UC Berkeley, where she studied psychology, Shelby wanted to go abroad to do volunteer work in the human rights arena.

"I was offered programs in Nicaragua but I wanted to come to Israel,” Shelby says. “My mother asked ‘Why Israel?’ One of the reasons was because my brother, mother and father are the only family members living in the United States—the remainder live in Israel. I grew up without a family… and I wanted to see and to know and to be known by my large Israeli family.”

Shelby came to Israel with The Jewish Agency’s Project TEN Tikkun Olam program. Project TEN brings together young Jewish adults from all over the world, to a program that combines volunteer work with local communities, alongside service-learning in the fields of international development, culture, identity and Jewish activism.

Shelby and her fellow Project TEN volunteers were based in Harduf, a kibbutz in the Lower Galilee located near the villages of more than 4,400 members of the Bedouin Ka’abiyye tribe. The road to Harduf is surrounded by green trees, soft rain and farmland.

Through Project TEN, Shelby volunteered with local communities, and studied social change, leadership, activism and strengthening ties between Jews and Israel. Volunteers’ homes are built with a green approach that encourages recycling, conservation. The idea is to foster a strong connection between nature and the people in the community.

Harduf’s inhabitants practice anthroposophy, an alternative educational system rooted learning in a therapeutic and relaxing atmosphere. Over one hundred Harduf children are educated in the community’s elementary, junior high, and high school. They study alongside children and teenagers from the neighboring Arab villages.

Shelby and her friends teach English in both the Arab and Jewish schools as part of a spirit of openness and coexistence.

"I chose to participate in Project TEN because it deals with, among other things, social justice and human rights. I studied both psychology and law at university and always knew I wanted to represent people fighting for their human rights. I worked in a Jewish organization engaged in human rights before I got to TEN,” Shelby says.

Project TEN allows volunteers to study the relationship and conflict between Jews and Arabs. Shelby, however, came to how these relationships impacted her directly.

“I never knew my mother had lived in a mixed family - both Jewish and Arab. I found out that her father is a Christian Arab and her mother is Jewish. And my grandfather has a big family in Acre. I didn’t expect to come to Israel to learn about Jewish-Arab relations and find out that this issue is directly related to my family and my life. I have a cousin serving in the IDF who is Arab and converted to Judaism and her sister is[n't converting]. It's interesting to see how the sisters feel about the situation. I’m learning so much about the relationship between Jews and Arabs and it is so significant to find out what the relations between Jews and Arabs are doing to my family, and me, personally. I didn’t know my cousins were Arabs until I got here," she says. " I went to their homes in the past and they spoke Arabic and I had no idea they were Arabs. Even after I signed up for TEN, I had no idea that this was my family story. I made a list of relatives that I should visit and when I got to meet them one by one, I discovered the secrets of my family; my mother's side of the family.”

Shelby contacted her mother telling her that she was “learning more about my family than you told me…It was amazing and sad to discover that my mother and her family never spoke about living in a mixed family in Israel. It was embarrassing for her as a child and she didn’t want to explain to me that she basically lost her Christian Arab father when she was just a year old; she never really met him.”

During Shelby’s stay in Israel she became close to her cousins in Acre who invite her on hikes around Israel. "I didn’t think it would be like this, and I was surprised in a good way. My Arab cousins even offered to come for Shabbat dinner because they know I'm Jewish.

Shelby’s revelations about her family continued as she discovered that "half of my mother's brothers are Orthodox and the others are mixed, one converted to Islam, which just shows how complicated and touching life can be in Israel. I get a perspective on life in Israel that Israelis don’t get," she says.

Shelby’s complex family history open her eyes and served as added motivation for her to work with the Arab children in the Shabiya neighborhood schools.

"When I walk into the Arab village to teach English to the children, and I hear the muezzin’s call to prayer five times a day. This is an incomprehensible experience because I could have lived my life without knowing or experiencing any of this."

The Project TEN volunteers at Kibbutz Harduf and the three Bedouin villages are facilitated by Sha’ar LaAdam, an international ecological Jewish-Arab center established by local residents of the kibbutz and Bedouin villages. The organization, active in the community since 2002, was established with the understanding that collaboration can bridge the gap between religions and cultures.

"Sha’ar LaAdam’s range of activities characterizes its belief that the first we must turn to ourselves, to our people in the communities in which we live, and then draw the strength and skills to promote and build our relationship," says Daniel Aschheim, Project TEN’s Director of Marketing and Public Relations. "In these complex times, when sometimes it seems that fear and distrust overcome everything else, Project TEN in Harduf is a beacon of humanity, humanism, and a bridge between populations. Additionally, it creates a dialogue between the volunteers, who come from all four corners of the world, amongst themselves - which strengthens the bond within the Jewish world and between people who come from different cultures. The center creates a real and sincere dialogue - without intermediaries - between people regardless of their origin. We are really creating a unique space where human activity is the center of attention. Project TEN is at the forefront of the Jewish world and is proud of the participants devoting their energies to make the world a little better and hold Gandhi’s maxim ‘be the change you want to see in the world’, which also serves as the credo for our organization."

On a more personal level, Shelby’s changes have been real and profound. "I could have lived my life without knowing what I discovered. I’ve learned here in five months things I’ve never learned in my life. You cannot imagine how much I have learned and experienced so far on Project TEN.”