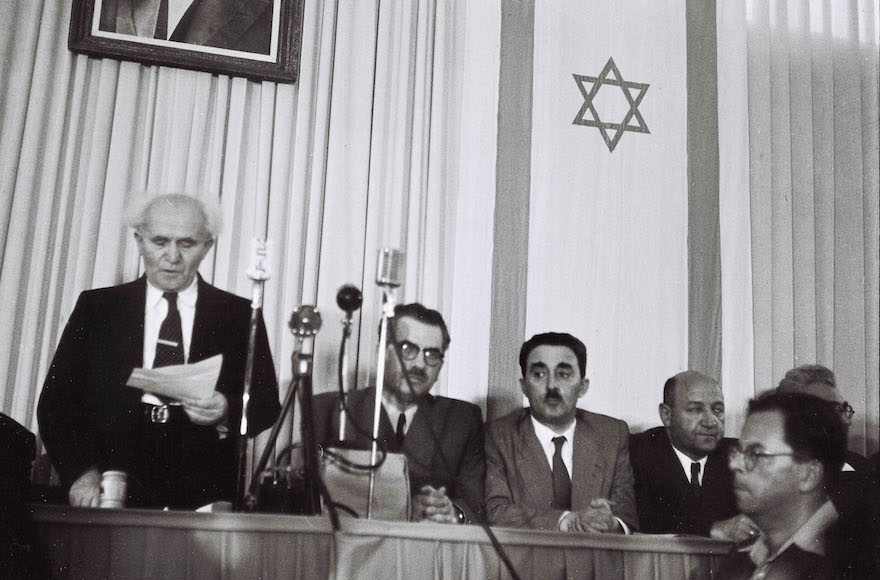 (JTA) — One year after Israel’s establishment, in the dead of night, three students ascended a tower at the Jewish Theological Seminary in New York and raised the Israeli flag.

The next morning, the Conservative rabbinical school’s administration took it down.

That act of surreptitious Zionist protest was one of several at JTS during the years surrounding 1948, when Israel gained independence, Michael Greenbaum wrote in an essay in “Tradition Renewed,” a JTS history edited by Jack Wertheimer. Students supported the new Jewish state. However, the seminary’s chancellor, Louis Finkelstein, opposed American Judaism focusing all its efforts across an ocean, and also needed to appease a board wary of Jewish nationalism.

But the students persisted. Once, they sang the Israeli anthem “Hatikvah” following graduation ceremonies. Another time, they convinced their colleagues at the Union Theological Seminary, the Protestant school next door, to play the anthem from their bell tower.

Today, nearly all American Jewish institutions are vocally, even passionately pro-Israel. But even in the years after the Jewish state won its independence 70 years ago, that feeling was not yet universal.

Before the Holocaust, Zionism itself was polarizing among American Jews. Many, especially in the Reform movement, felt support for a Jewish homeland would cause their loyalty to America to be called into question. The other side was represented by Louis Brandeis, the first Jewish Supreme Court justice, who saw no conflict between American values and Zionist aspirations.

By the time Israel declared independence on May 14, 1948, American Jews, scarred by images of the Holocaust and Nazism and inspired by newsreels of tanned kibbutzniks, were largely supportive of Zionism. But they were not yet turning out for organized political advocacy and mass tourism to Jerusalem and Tel Aviv. Instead they were getting used to the idea of a Jewish sovereign state — gradually incorporating it into their culture, prayers, and religious outlook.

“After the mid-1930s, the majority of American Jews had come to be positive one way or another about the idea of a Jewish homeland,” said Hasia Diner, director of the Goldstein-Goren Center for American Jewish History at New York University. “While 1948 on the one hand was very exciting and [had] lots of communal programming and celebrations, it was slightly anticlimactic in the sense that opposition had been gone for at least 10 years.”

North American Jewish support for Israel was turbocharged by the Truman administration’s quick recognition of the state, and by the Israeli army’s victory against the Arab states in its war of independence.

In February of that year, Golda Meyerson (later Meir), raised $400,000 in one day (the equivalent of some $4 million today) on behalf of the provisional state on just one stop in Montreal. In the weeks following independence, she started a drive in the United States and Canada for $75 million more (or about $750 million in 2018 dollars).

“There was a sense that once America recognized the state, Zionism had won, and everyone wanted to link with the winners,” said Jonathan Sarna, a professor of Jewish history at Brandeis University. “It was growing very quickly, it took in all of these refugees, which solved that problem.”

After Israel secured its independence, American Jews began to engage with the new nation in small ways. There was no rush of tourism, but American Jews would show their support by purchasing goods from Israel, reading books about Israel, or holding Israeli dance classes in their community centers.

“Here’s this new state they had to kind of develop this relationship with, [and] the cultural realm was really the place it was happening,” Emily Alice Katz, author of the 2015 book “Bringing Zion Home,” told the New Books Network podcast. “There were these years in which it wasn’t as much about rallying the troops for these massive outpourings of aid or political influence, but it was more of this coming to know Israel.”

Part of the reticence to support Israel stemmed from the ethos of 1950s America, with its focus on suburban growth, the “melting pot” and assimilation. Against that backdrop, American Jews were trying to prove they belonged as social and cultural equals in American society. So again they were fearful of “dual loyalty” charges that could stem from vocal support for a Jewish state.

In a watershed moment in that debate, Israeli Prime Minister David Ben-Gurion sent a letter in 1950 to Jacob Blaustein, president of the American Jewish Committee, which for many years had been hesitant to throw its support behind the Jewish national movement. Ben-Gurion pledged not to speak for American Jewry or intervene in its affairs, and to dial down his insistence that American Jews move to Israel. In exchange, Blaustein recognized “the necessity and desirability” of supporting Israel in its nation building.

“The 1950s were the heyday of American Jewish assimilation,” said Sara Hirschhorn, an Israel studies professor at Oxford University. “It was the postwar era, when American Jews were benefiting from the same things everyone else was benefiting from — the GI bill, all kinds of ways for people to move into the middle class — and they wanted to continue to make the most of that.”

Nevertheless, Israel began to show up in American Jewish religious practice. A Conservative prayer book published in 1949 had readings about Israel, but not the prayer for Israel that is now standard in many prayer books. Religious schools gradually shifted their pronunciation of Hebrew from European Ashkenazic to Sephardic-inflected Israeli. Non-Zionist religious leaders eventually were sidelined.

The biggest shift, Sarna said, was American Jewry viewing Judaism’s history as one of “destruction and rebirth.” That outlook posed the Holocaust and the establishment of Israel as its two poles and, Sarna said, remains dominant in American Jewish thinking today. He noted that Israel’s Holocaust Remembrance Day and its Independence Day are commemorated about a week apart by design.

“The theme of destruction and rebirth becomes a very important theme in the lives of American Jews,” he said. “So much so that American Jews don’t know the history of Zionism going back, and have bought the idea that it’s all about the Holocaust being linked to the birth of the State of Israel.”

American Jews became more open in their celebration of Israel about a decade after 1948. “Exodus,” the 1958 novel by Leon Uris that painted Israel in heroic terms, was a national best-seller and was adapted into a popular movie in 1960 starring Paul Newman and Eva Marie Saint. In 1961, the Yiddish star Molly Picon starred in a Broadway musical about a visit by American Jews to Israel, “Milk and Honey,” which ran for over 500 performances. A few years later, the Israel Pavilion at the New York World’s Fair showcased the country’s charms. And as Cold War tensions continued into the 1960s, Israel began to be seen as a U.S. ally against the Soviet Union.

In 1967, Israel’s existence was again threatened by Arab armies. Between the anxious buildup to that war and Israel’s lightning victory, American Jewish acceptance of Israel had turned to adulation, placing the Jewish state at the center of their identity. The few dissenters are found on the non-Zionist left, among various haredi Orthodox movements, and in the quiet grumblings of some mainstream leaders and rabbis who think the emphasis on Israel has thwarted the development of distinctly American Judaisms.

“Slowly but surely, Israel became more important for American Jews,” Sarna said. “1967 is at once a reflection of Israel’s growing importance, but at the same time it is a great intensification of Israel’s centrality.”