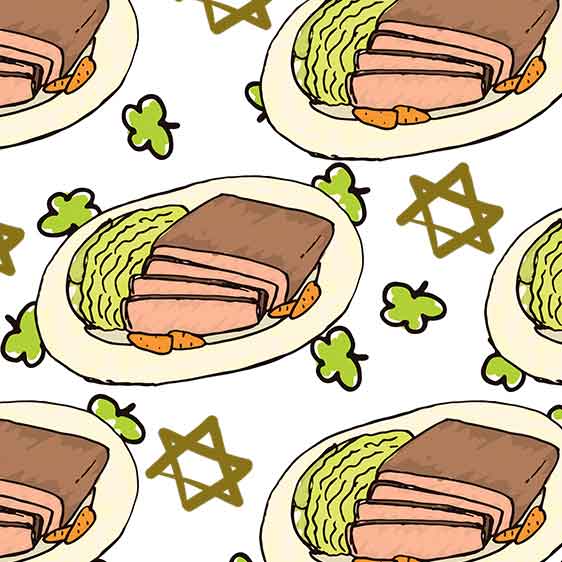 No, but really. Corned beef and cabbage may be considered the most iconic dish to enjoy on St. Patrick’s Day for its Irish roots. But actually, the dish really came from the Jews. More specifically, the Jewish New York deli.

Jewish, Italian, and Irish immigrants lived side by side in many of the poorer New York neighborhoods in the early 20th century, especially on the Lower East Side of Manhattan, as well as certain areas of Brooklyn and the Bronx. Just like Jewish newcomers, who adapted many of their beloved foods from the old country, the other immigrant groups were doing the same thing — hello, New York pizza! Back in Ireland, there was a traditional dish of bacon and cabbage, and while “corning beef” did exist, most people stuck with pork, not beef, due to its low cost. But when Irish immigrants saw the salty, cured corned beef their Jewish neighbors were enjoying, it reminded them of their own comfort food. As Westchester Magazine explains:

When the Irish immigrated to the U.S. they often faced discrimination and lived in slums alongside groups like the Jews and Italians. It was at Jewish delis and lunch carts that the Irish experienced corned beef and noticed its similarity to Irish bacon. Cooking the corned beef with cabbage was another choice based on cost efficiency. Even better, the entire meal could be cooked in one pot making the dish cheap, easy to make, and let’s not forget — tasty.

So corned beef and cabbage was basically one of the first “one-pot wonders” that Americans came to love. And let’s be honest, corned beef and cabbage just has a better ring to it than “bacon and cabbage.” As a result of shared immigrant experiences, a new, American Jewish-Irish dish was born. Meanwhile, back in Ireland, the most traditional dish to eat on St. Patrick’s Day remains lamb or bacon; according to Smithsonian Magazine, the popularity of corned beef and cabbage never traveled back across the Atlantic to the homeland.

So there you have it: a little Jewish history to go with your St. Patrick’s Day celebration. In light of the history of corned beef and cabbage, I see the holiday more than ever as a celebration of our diversity and shared immigrant experiences.

by Shannon Sarna, My Jewish Learning