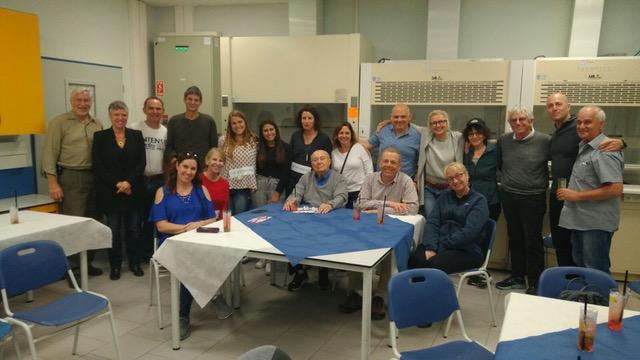 The San Diego Delegation in Sha’ar HaNegev celebrates the 20th anniversary of its partnership with members of the Sha’ar HaNegev municipality, the Yitzchak Shavit High School, the Parternship2Gether Program of the Jewish Agency, and the two Shinshinim high school students who will be serving a year of service in San Diego beginning in August.

This month, a small but mighty group of San Diegans, is visiting Israel and stopping in Sha’ar HaNegev, to commemorate not only the 70th anniversary of the State of Israel, but the 20th anniversary of our partnership with this incredible region.

On Thursday, April 26th, Sha’ar HaNegev hosted the annual Viterbi Arts Festival at the Yitzach Shavit High School. Thousands of people from the region were in attendance, including Andrew Viterbi, Caryn and Alan Viterbi, and Valerie Viterbi, the wife of the late Alex Viterbi, for whom the high school’s Art Center is named. Part of the evening's ceremony was dedicated to the 20-year partnership between San Diego and Sha’ar HaNegev with presentations made to former Mayor Shai Hermesh, who in 1998 helped initiate the relationship, and to current Mayor Alon Schuster, who has helped to nurture the partnership into what it has become today.

Michael Sonduck, President and CEO of the Jewish Federation, could not be in Israel during the Viterbi Arts Festival, where the presentations were made. Instead, he wrote the following letter to Mayor Schuster:

We read daily of the gathering of those at the border who are inciting violence and hatred toward Israel while at the same time I remember your hope and dream for a peaceful border of neighbors.

Our hopes and dreams are with you, and our extended family in Sha’ar HaNegev.  Soon you will welcome another delegation from San Diego to help celebrate the 20 year partnership of our two communities.  May they come and go in peace!  I am sorry not to be able to join them and you, in the celebration.

My hope is that this partnership goes from strength-to-strength for years and years to come.